Condition Monitoring of a Fan/Blower 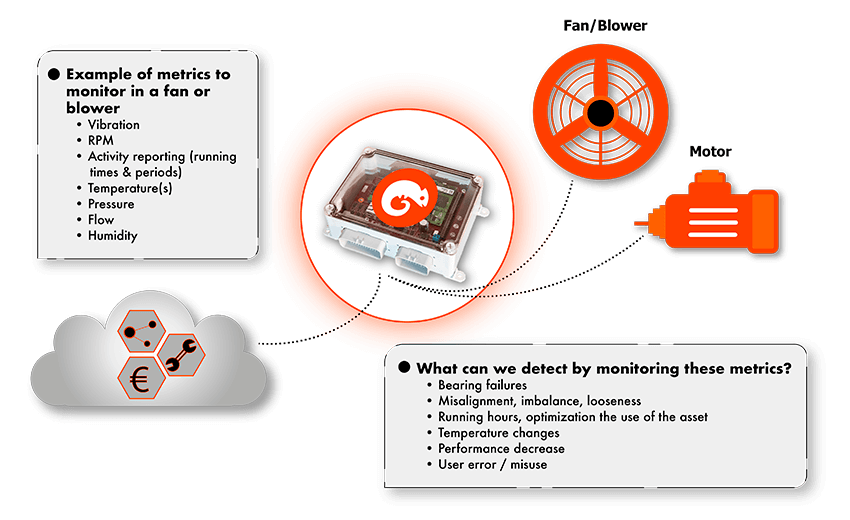 Fans and blowers can be essential parts of a wide range of industrial applications. They are used not only to, control process variables such as temperature and humidity but also extracting dust and dangerous fumes.

Despite their importance, fans and blowers are often considered low-value assets. They’re relative lower cost can lead organizations to think it’s cheaper to just replace them upon failure.

What often gets overlooked is the time required to replace assets after a catastrophic failure. Losing a fan or blower can mean stopping the line and potentially every line it feeds until repairs are made. They also can draw away heat from assets such as motors and drives, extending more expensive equipment life.

Bearings in industrial fans and blowers operate at high speeds and relatively light radial loads. They may also operate in extreme temperatures, both hot and cold, as well as in inaccessible locations. Quite often, airflow is used to transport material. Dust and grit can become caught in an impeller, creating unbalance, bearings can wear down, motors can slow down – the possible failures are numerous.

Hard to reach, but easy to monitor

Fortunately, there are several ways in which rotating parts can be observed to monitor their performance.  The most commonly used method is observing vibration, which can change in frequency or intensity as parts degrade or approach failure

Fans and blowers may be difficult to access and are commonly mounted to the ceiling or upon a roof. This makes them difficult and potentially unsafe to monitor with manual route-based vibration monitoring but ideal for remote online condition monitoring.

Please use the links below to learn more about the Condence platform!